Home / Impact / Grateful Patients / Back in the Race: How Dr. Steve Garfin Saved A Life 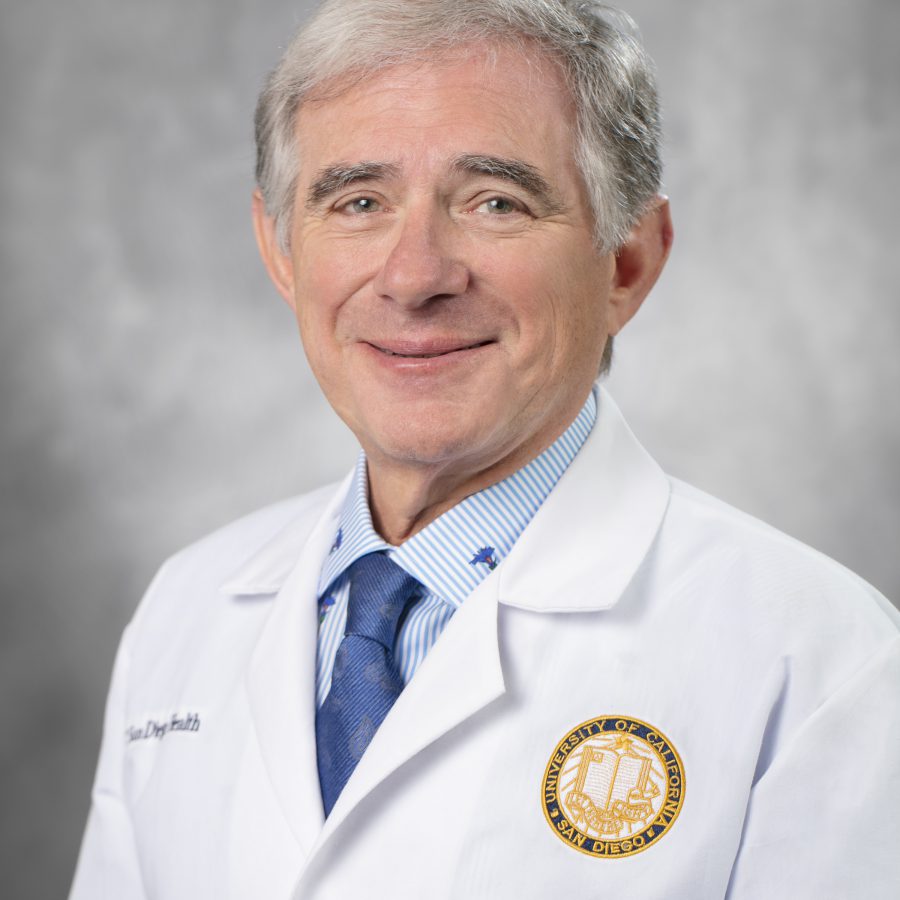 Dave Love has been an active athlete his entire life, running some 50 marathons and completing no fewer than 20 full Ironman Triathlons — including the Ironman World Championship in Kona, HI, seven times — plus countless shorter running races, triathlons and competitive cycling events.

He has also faced his fair share of injuries — an old football injury kept him out of the Vietnam War and later he was hit by a boat propeller while scuba diving in Palau, requiring two plates and 21 screws to treat the damage in his leg. At the time he had already signed up for a bike ride from San Francisco to La Jolla. So, only a month and a half after the diving incident, he started the ride, but fell and broke his femur, requiring another surgery. In 2001, another cycling accident while riding downhill at nearly 50 mph injured his ribs and shoulder in addition to puncturing his lung. Despite these injuries and surgeries, Dave kept training and competing. Over time, the toll on his body became more apparent — Dave’s back started to go. “I only have good days and great days, but the days were becoming more good than great, and that’s when I knew I had to see a doctor,” says Dave. Surgery to repair his back was recommended.

Dave spoke with two doctors about back surgery, but kept looking. However, when Dave met Dr. Steve Garfin, he knew it was going to work. He liked him right away. “He wasn’t surgery happy,” remarks Dave.

Dr. Garfin recalls their first meeting — Dave had trouble walking and looking ahead due to a pinched spinal cord, in addition to a severe curvature in his back, known as kyphosis. The surgery to correct these issues is as complex as it is delicate. In order to decompress the spine and remove pressure, Dr. Garfin would need to place screws in channels in the vertebrae at precise intervals. Dave would also require a spinal fusion. This would involve connecting the screws in his spine to a rod which would force his spine straight.

However, there was one obstacle with serious implications: “Dave is mentally tough, physically tough, but he has Parkinson’s disease. That means his bones are softer than normal.” Dr. Garfin elaborated that he didn’t know how soft Dave’s bones would be prior to surgery, and that drilling into soft bone and attempting to attach the necessary screws could have disastrous results. Additionally, people with Parkinson’s walk with a gait that, mechanically, is not favorable to the spine and makes them at risk to fall. Patients are required to wear a restrictive jacket to protect the spine after this surgery which, paired with the potentially soft bone, could pose real challenges to Dave’s successful recovery.

About three weeks after that surgery, Dr. Garfin had to go back in and cut off a couple of the screws that had pulled loose. And with that, Dave flew to Japan three days after a successful surgery to recover in his home aboard the residential ship MS The World. Dave went through the surgery with absolute confidence in Dr. Garfin’s ability. “I’m always fine … At the start of a race I know I’ve won whether I do or not. It’s how I am built.”

Unfortunately, Dave’s recovery was not a smooth one, and more of the screws pulled out of his spine; the bone had fractured and was now pinching his spinal cord. Further, his spine had collapsed at the thoracic level, posing a threat to his lungs and heart. Dr. Garfin and his protégé Richard “Todd” Allen, MD, PhD, went into surgery right away, forgoing the usual MRI, as Dave’s frame was too bent to obtain a clear picture. The damage to Dave’s spine, and the surgery itself, posed a very real risk of paralysis or death. Dr. Garfin and Dr. Allen operated through a small hole in Dave’s side, utilizing a metal cage to protect the spinal column. They worked around the lungs and heart to bend the metal rod, and Dave’s spine, back into place.

Dave emerged from surgery with a profound gratitude for Dr. Garfin, who he describes as one of the finest surgeons in the country. “There is no way I would be able to walk around the way I do if not for Steve. It’s an amazing thing he did; he saved my life.” The remarkable results of Dave’s surgery were immediately apparent in the X-rays he shared — the surgery that straightened his spine also increased his height from 5’10” to 6’2”.

It is this appreciation that inspired Dave’s desire to make a philanthropic gift to the Department of Orthopaedic Surgery to honor Dr. Garfin. “I can’t think of anything I’d rather be philanthropic about than honoring Steve,” Dave remarked, “a doctor saves people, I never did … I made some money and try to use it honorably.” It is Dave’s intention that his gift will be used to support Dr. Garfin and emerging young talent at UC San Diego Health, such as Dr. Allen, who played an instrumental role in his life-saving surgery. Dave describes Dr. Allen as “an amazingly talented surgeon. Humble. Kind. A doctor’s doctor,” who is primed to follow in Dr. Garfin’s footsteps as a result of his training and mentorship.

Dave also credits his wife for his successful recovery, “if I didn’t have her, I wouldn’t have the results I did … She put up with me, it was not easy. She got me out of bed for six months.” Although Dave was able to walk the day after surgery, rehab was hard work, and he spent six months in a body cast exercising and recovering aboard MS The World.

Today, the admittedly private Dave is willing to share his story to honor Dr. Steve Garfin who over time has become a friend.

“People would say I’m inspirational. I refute that — I don’t try to be … I don’t want recognition, I want Steve to get recognized. Thank you, Steve, for your excellent care. Your innovations in surgical techniques to treat spinal disorders and your mentorship as interim dean at UC San Diego School of Medicine have made an incredible difference in the lives of your patients and the orthopedic surgeons who follow in your footsteps.” – Dave Love