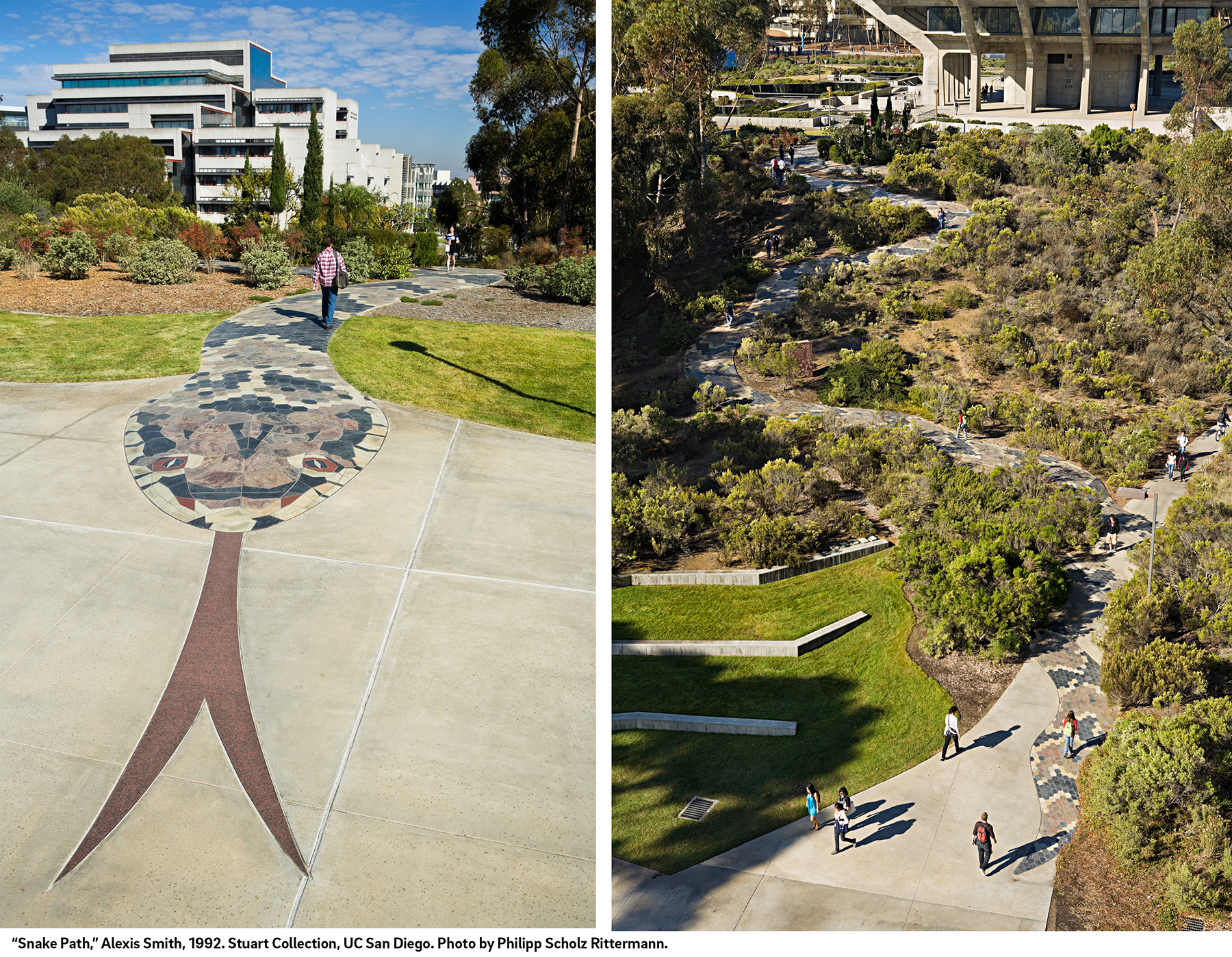 They are carefully melded to the earth, absorbed into woodlands and sewn into the fabric of existing structures. Meandering the 1,200-acre UC San Diego campus, you will likely stumble upon a treasure—a giant, vibrantly colored bird embellished with a gilded crown, an oversized red shoe frolicking through the theatre district, or a secret lookout with coded messages.

The 19 site-specific sculptures that comprise the Stuart Collection—a campuswide collection of commissioned public artwork—each have a unique story to tell. And three more pieces are about to be added to the collection’s iconic repertoire.

At 62 feet long and 22 feet tall, Alexis Smith’s mural makes a statement. But, it isn’t just the size that impresses, the imagery itself powerfully imprints in your mind. A quaint village surrounded by neat rows of citrus trees lay sheltered by rolling hills. Suddenly, an ominous snake metamorphoses from the very road that leads there, shattering the illusion of paradise.

The scene came to Smith in a vivid dream when visiting San Diego. She illustrated the unforgettable dreamscape in a large mural, painted in 1986 as a temporary commission for the Brooklyn Museum. Titled “Same Old Paradise,” the work also incorporates eight collages featuring souvenirs from a road trip, including a Levi’s jacket, license plate and car ashtray. Across each panel runs a recap of Jack Kerouac’s novel, “On the Road,” which served as inspiration for the painting.

“‘Same Old Paradise’ is my distilled vision of the promise of the open road and a fruitful land most commonly referred to as the American dream,” explained Smith.

The massive mural has been carefully curled up in a crate for 30 years. In January, the painting was unveiled again for the first time, prompted by the discovery of a wall where it could be displayed—something Stuart Collection director Mary Beebe has been seeking for decades. “Alexis promised that if we could find the space, we could have the painting,” she explained.

The commanding landscape—worth an estimated $350,000—will be permanently displayed near the entrance to an auditorium in the future North Torrey Pines Living and Learning Neighborhood, a new academic, housing and retail community at UC San Diego that will debut in fall 2020.

What makes the donation even more special is the fact that “Same Old Paradise” served as the inspiration for Smith’s “Snake Path,” one of the Stuart Collection’s most beloved works, completed in 1992. The 600-foot-long snake, made up of 7,000 tiles, slides up the hill from Warren Mall to Geisel Library, encircling a giant granite book representing Milton’s “Paradise Lost,” and a further up a miniature Garden of Eden.

“It is particularly important to me that ‘Same Old Paradise’ has found a beautiful permanent home at UC San Diego, because I had that life-changing dream while visiting San Diego,” said Smith.

The Stuart Collection was launched in 1982 by the vision and philanthropy of James Stuart DeSilva. Over the years, the full collection has been donated to UC San Diego with the university assuming responsibility of growing the body of work. A key source of support in this endeavor is the Friends of the Stuart Collection, a network of 130 arts enthusiasts who help fund new projects.

In 2015, a $1 million gift by Mary Looker launched a permanent endowment to help foster the growth of the public art collection at UC San Diego for years to come. Completely self-sustaining, the Stuart Collection relies on philanthropy to bring new sculptures to life.

In addition to Smith’s mural, there are two more exciting Stuart Collection projects under way. Prominent painter Mark Bradford commenced his first permanent installation on campus this fall. Now the tallest structure at the university, the work is a monumental ode to the origins of today’s lightning-speed communications.

The third piece, still in the visioning process, is conceived by Ann Hamilton, an esteemed artist known for weaving literature, movement and people into sensory environments. The proposal involves a series of swings that hang from Pepper Canyon’s new transit station trestle and an embossed pathway that leads into the heart of UC San Diego.

For those interested in experiencing the sculptures in person, visit stuartcollection.ucsd.edu to download a map for a self-guided tour. To learn more about how to help support the Stuart Collection at UC San Diego, contact Mary Beebe at mbeebe@ucsd.edu or call (858) 534-2117.