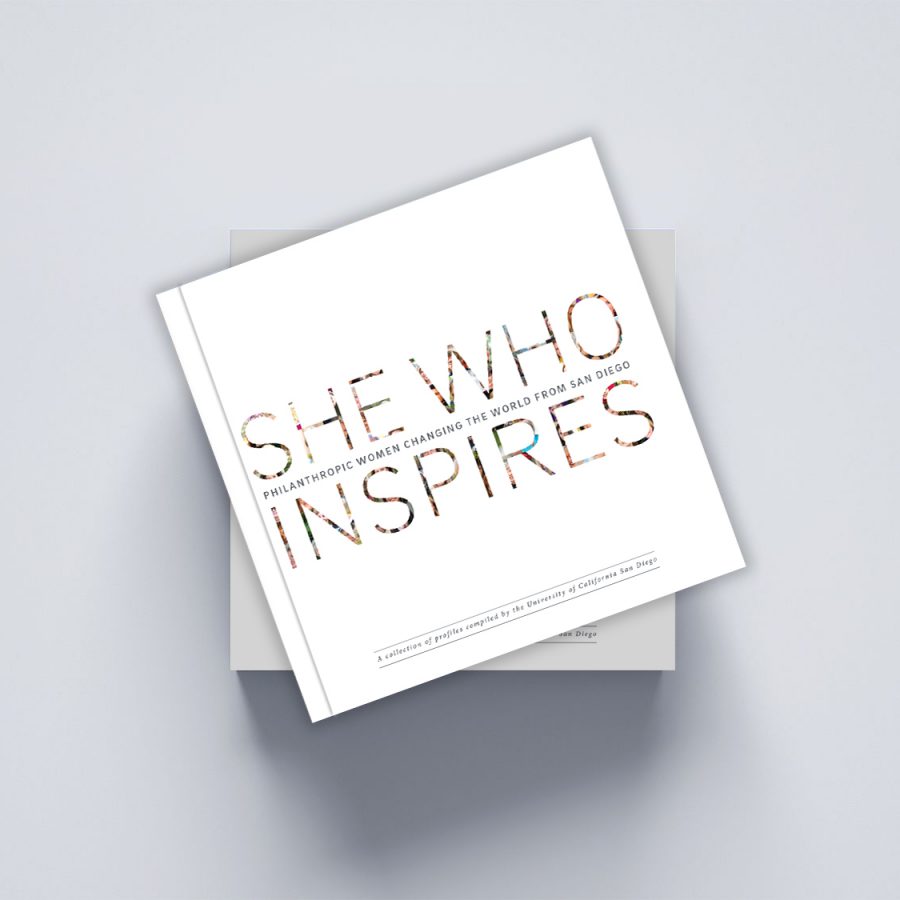 Philanthropy is about more than giving money – it is about giving time, leadership and vision. And for women like Mary Ann Beyster, Carol Littlejohn Chang and Amina Sheik Mohamed, passion for education, underserved populations, research and other causes has inspired them to give all of these – and more – to their community.

Mary Ann, Carol, and Amina are just three of more than 115 philanthropic San Diego women profiled in She Who Inspires, a new book being released in November. Produced by UC San Diego’s Office of Gift Planning, She Who Inspires was conceived as an opportunity to highlight the diverse San Diego women who contribute to making our community better. Carol Littlejohn Chang’s family was deeply involved in philanthropic activities through their church, and as a child she worked with underserved populations in East Los Angeles. This early immersion in volunteer work prompted her to commit to helping women in San Diego. As a charter member and past chair of the San Diego Women’s Foundation, and chair of the UC San Diego Foundation Board, Carol is able to channel her time toward supporting a number of causes that align with her values and passions.

Carol’s story is familiar to many of the women featured in She Who Inspires. Their early experiences volunteering in their communities contributed to a lifelong passion for philanthropy. These women do not just give their money, they are board chairs, nonprofit founders, and on-the-ground volunteers who enjoy seeing first-hand the effects of their work. And for many of them, including Carol, seeing that impact is the greatest thanks they can receive.

“UC San Diego was smart to appoint extraordinary women, like Carol, to roles in leadership, research, and other positions of influence,” said UC San Diego Chancellor Pradeep K. Khosla. “Their contributions not only make our university a better place, they also create an environment that embraces inclusivity and leads to world-changing discovery.” Supporting women and young people is the factor that unifies Amina Sheik Mohamed’s philanthropy. In 2015, she founded the Youth Advisory Council at UC San Diego’s Center for Community Health to support young people of color, many of whom are immigrants or refugees. She is passionate about ensuring that individuals and communities that have experienced historical and systemic inequalities have opportunities for success.

Amina, and other women like her, are part of a growing movement towards increasing philanthropy among women. Women will control two-thirds of the nation’s wealth by 2030. And women tend to be more philanthropic than men – giving nearly twice as much annually. But these trends do little to illuminate the women themselves.

“We know a lot about the Warren Buffets and the Bill Gates and the Michael Bloombergs, but we know next to nothing about women like Mary Ann, Carol, and Amina,” said Elise Wald, director of development in UC San Diego’s Office of Gift Planning. “We wanted to celebrate these women and the things that make them and their philanthropy unique.” When she was a child, Mary Ann Beyster’s family supported a number of programs committed to helping families, young people, and research, including Achievement Rewards for College Scientists and UC San Diego. Today, Mary Ann is involved with a number of nonprofits in San Diego and across the country that focus on public health, science and technology, the environment, and education.

Like many women, Mary Ann (pictured with her mother, Betty) contributes to a number of institutions and initiatives, and she considers each donation carefully. Her philanthropy, and that of the other women in She Who Inspires, underscores a number of trends — that women tend to give to many causes rather than to one particular cause, that they are often passionate ambassadors for the nonprofits they support, and that women give to education more than any other sector – but it also shows a more nuanced and personal approach to giving.

“Philanthropy is bigger than any one person,” said Dani Dawson, executive director of development in UC San Diego’s Office of Gift Planning. “This book was intended to show how, when people – especially women – contribute just a little bit of their time, talent, or treasure, it makes an outsized difference in people’s lives and our community.”

But perhaps what She Who Inspires does best is show how, for women like Mary Ann, Carol, and Amina, philanthropy isn’t about numbers or notoriety. It’s about leading, inspiring, and asking the most fundamental question: What can I do to make the world a better place? The answer, for them and all of the extraordinary women in She Who Inspires, is to give what they can.

To learn more about She Who Inspires, visit giftplanning.ucsd.edu/shewhoinspires.